Abattoir Blues is the third part of the “Trilogy of Abundance”. After focusing on food waste (Funky Pudding – 2009) and sugar addiction (Sweet Dreams – 2014), Luigi Ciotta turns to another hot topic of our times: the mistreatment of animals in intensive farming and our society’s ambivalent relationship with meat, which is progressively becoming more and more charged with new taboos.

Once again, the aim is not pointing the finger at meat-eaters or any-one else. The subject matter here is mankind in general, and the contradictions and weaknesses that burden our attempts to deal with our primal feelings and our beastly nature, here represented under the guise of our relationship with animals.

In Abattoir Blues, a different destiny is in store for each animal. Before being  slaughtered,  for  instance,  a pig becomes a fakir, or is chopped into pieces to then be put back together inside a box, as in a classical magic trick. A rabbit reappears from a hat to escape its doom, while an overweight hen vanishes from a cage too small to contain it. A group of chickens performs an acrobatic act on the trapeze before being hung to a hook and offered up to the audience with the label “already plucked”, while animal innards made up of ropes and knots become alive in a series of increasingly sophisticated illusion acts.  A sheep will be played as a bagpipe and a half-beef hanging on a pole will become a partner for an acrobatic Tango scene.

The vehicle, crammed with fake animals, enters the scene driven by the protagonist and unveils a colorful world of puppets in the shape of pigs, hens, sheep, cows, rabbits and geese, divided by laces, cages, fences and aviaries.  The reference is also to human trafficking, a grueling phenomenon that keeps happening in today’s world: the symbolic parallelism thus captures the “commodification of flesh” in its most basic aspect. By mimicking the boats crammed with migrants that sail the Mediterranean sea, this wagon could also be seen as a “contemporary” Noah’s Ark; ironically, however, it will not bring these animals to safety, but will condemn them all to the slaughterhouse, one by one as in a Russian roulette game.

Although the actions staged are raw and violent, the show is constantly played on the language of contrast: the fiercest and most savage of gestures are also somehow delicate and light, and the sense of touch is at the centre of the performance. 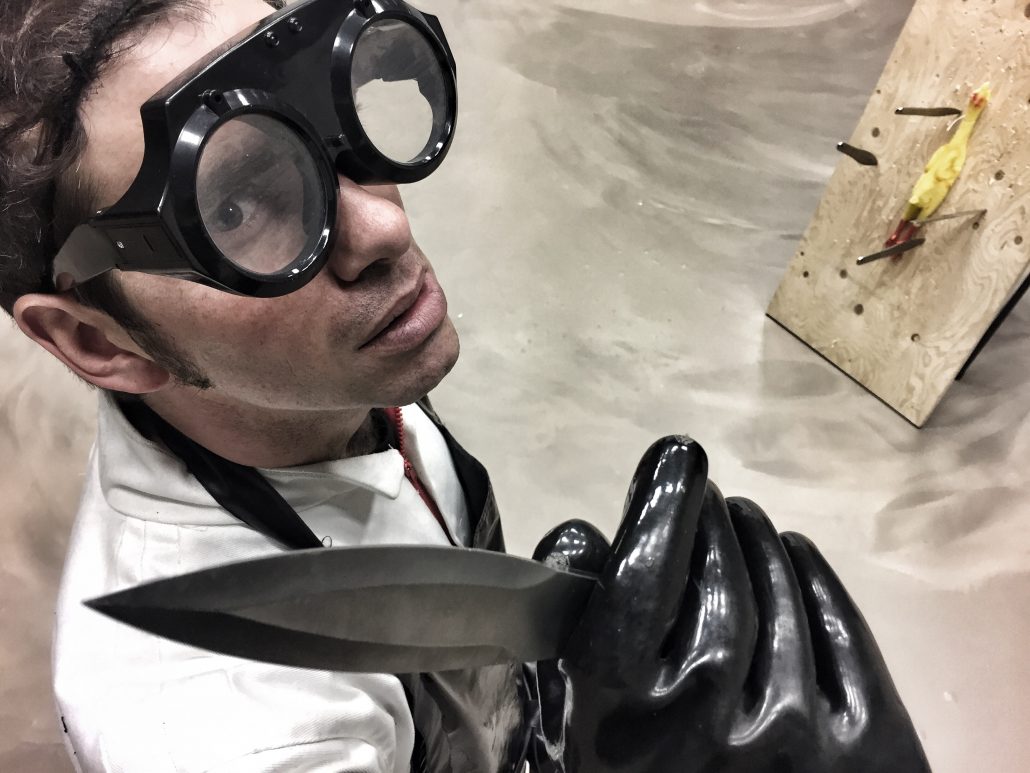 The show’s protagonist is a common worker, a typical slaughterhouse at- tendant in overalls and rubber boots. He is a lonely person with borderline traits who spends his whole life surrounded by animals of all sorts, both alive and dead. His job is alienating and repetitive; its unbearable tension with life, which it constantly suspends  between  harshness  and death, is well expressed by the choreography of movement and the juggling.

In this surreal atmosphere, killing an animal becomes a poetic gesture that allows escaping the torture of being oneself and its alienating routine. To the protagonist, ultimately, everything is animal: everything is flesh that can be slaughtered. The animals, both alive and dead, are the only counterparts to the protagonist’s doing; it is to them that he relates at all times, in a projection game where victims and oppressor have their roles progressively reversed.

Abattoir Blues does not aim at passing a judgment on the character and his actions: all his deeds stem purely from his survival instinct, and are nothing but a relentless dance of acts that his craftsmanship requires.

All of it in a comical, grotesque and surreal tone, according to the rules of buffoonery and clownery. The show is a mixture of street theatre, puppetry, circus, physical theatre and comedy in which words give way to sounds, ver- ses and noises, both live and recorded.